The Fine Arts Center used to do an annual holiday festival called the Gallery of Trees. It’s been 14 years since they did anything even reminiscent of this event. But at the end of 2016, they brought it back. Changed the name to Holiday Lights, in an effort to be inclusive.

The original plan was to use birch like trees and have artists submit proposals to decorate them. These trees that were planned, it was discovered that the limbs were very flimsy and this was going to be a problem.

I was planning a tree with a group of artist friends at this time, we had halfheartedly joked about doing a tree, but never followed through. But, Lisa sat on the committee for the FAC and we ended up doing one because there was a need. The main bulk of the trees used by artists changed to the traditional fir tree shape, but we were allowed to use the original birch as that was what our theme and idea was based on. 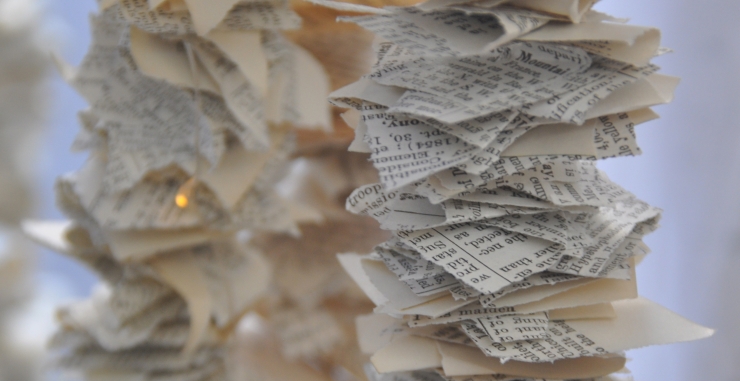 So we ran with the flimsy limb idea and thought weeping willow. A long time ago the four of us had done an installation called Sitting Shiva, where we sat, tore books, and mourned the loss of a dear friend. At that time, it felt like paper books were on the decline and we wanted to make a statement about their disappearance.

With this tree, pulling the idea of torn book pages, we created our tree, Lamenta Scriptum, in the same vein as our previous installation. With strings of torn pages (much like the popcorn or cranberry strings that are often made around the holidays) and using the Latin name to insinuate mourning and books.

The tree has thus come down, but I’ve kept the strings of pages and hope to do something more long term with them, perhaps a room divider or mobile someday.

Visit my About page to get the scoop on all things me.

Buy Me a Coffee.